So, my mom and I spent three weeks in Australia and New Zealand about four years ago. I flew in from Baltimore (32 hours including a brutal six-hour layover in Los Angeles) and she flew in from Seoul (8 hours?).  We landed in Sydney first thing in the morning and decided to beat jet lag by starting out.  We headed straight for the Sydney Opera House. ALL, I wanted was a photo in front of the Opera House. I had traveled from VERY far away and was leaving for Melbourne in 48 hours and I HAD to get a photo in front of the Opera House. I thought, ‘Ha! I’ll use it for my holiday card this year. People can show their babies and dogs. I went to Australia and everyone is going to know it!”   My mom tried hard. She’ll be the first to tell you, she’s not the greatest photographer. So, I present to you, the photo my mom got of me in front of the Opera House. 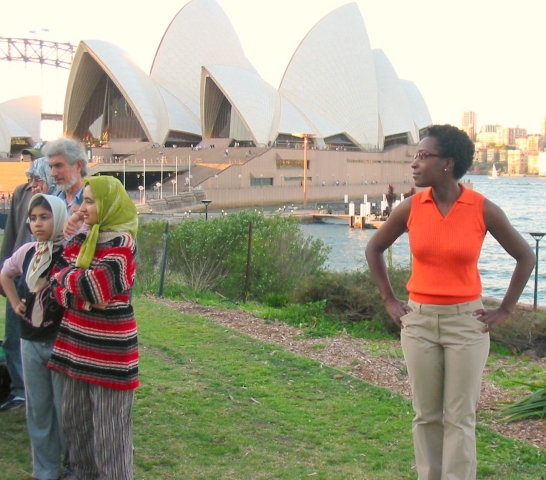 Me, looking annoyed and this family of like 10 that would NOT get out of  the shot.

Had class yesterday and it was a whole different scene! First, the antagonist said ‘hello’ when I came in to class. Most of the girls were exceptionally nice to me. And the classroom was the most orderly and focused it’s been since we started. It was a PLEASURE to draft collars! I know I say this every week, but I will show that this weekend. It’s so easy and cool to watch it come to life on paper!

In high school, I thought 3/4 length sleeves were real dumb. 25 years later, I've come to realize I actually kind of prefer them on me. It helps to break up the lines so I'm not one solid block (esp when I don't have waist definition).⁠ ⁠ This is my croissant sleeve sweatshirt from @Burdastyle. It's 'croissant' because of the pleats/tucks in the sleeve and all credit for the name to @redsilvia (I said 'shrimp' at first and croissant is so much better). I sewed the 46 in this top and it's too roomy on me. I still like the style and will make again, but will shorten the sleeves several inches to go from long sleeve to 3/4 sleeve and go down to a 44 for a slimmer fit.⁠ Alterations: lowered neckline, made a dartless FBA and graded out the hips. ⁠ Curated Closet:⁠ This is in my 'work from home' 'weekend clothes' void. Red is in my personal color palette and stripes give me the high contrast that I love and work well for me. Fabric is a DKNY French terry. As for style, this gives me my nautical/military vibe too.⁠ .⁠ .⁠ .⁠ .⁠ .⁠ .⁠ #burdastyle #frenchtuck #frenchterry #108Burda092018 #sweatshirt #stripes #nautical⁠ ⁠
You've got three weeks to do your tabeling and tagging before the Destash! ⁠ For efficiency in the swap it's very important that you come with a count of the number of units you are bringing. Each cut, each skein, each book, each pattern, each ‘thing’ you have is one unit and we need to know on Saturday, March 14th your total number of units. This unit count will help us group shoppers for the 'shopping' portion.⁠ ⁠ Labeling will help our volunteers get your items quickly sorted. And, help 'shoppers' know what they are getting. It's also helpful for people who may have allergies or aversions to certain materials or if it was in a home with a pet. If you aren't sure what you have, just write 'unknown' or my favorite, "It's a Mystery!". ⁠ ⁠ In 2018 I heard from folks who said 1/2 a yard was too small for garments and many of our donation locations only accept fabric that is at *least* one yard in length.⁠ So, that's how we set a one-yard minimum length for garment fabric.⁠ ⁠ If you missed the download link in the FAQ when you registered, you can go to the link in the bio to download your labels (12 to a page). ⁠ #DestashBaltimore
🌞 Entering the yellow phase of our midwinter Florida vacation (and the last wardrobe post from it). ⁠ ⁠ Burdastyle Dior dart sack dress in yellow stretch linen. Made this back in May 2018 and live in it during the summer. Technically, pastel yellow is an 'accent' color in my Curated Closet personal color palette. For me, that means I love the color on me, but don't want an entire wardrobe of yellow all year round. It's perfect for summer.⁠ ⁠ Second photo is with my cousin in the navy blue velvet StyleArc Besharl Jacket I made two weeks ago. I think I might like this dress better with this main color to break it up a bit. Multiple layers also feel more like a complete outfit. Photo was taken in front of the @Lycettedesigns needlepoint shop in Palm Beach, Fla. Gorgeous store if you have a chance to visit. I walked out with just a needleminder, and that was a great accomplishment. ⁠ #118Burda022011 #burdastyle #curatedcloset #brightcooldeep
🍆 I chose aubergine/eggplant as one of my "cool neutrals" for my Curated Closet personal palette (the other is a gray). I wasn't sure how I'd pair it, or even if I had anything that color. Turns out I did! . . @cashmerette Montrose top paired with my @Burdastyle Plus cool red linen pants. Wouldn't have thought of this combo in a million years, even though the Montrose's vintage Japanese fabric has bits of red in it. . . . #curatedcloset #cooldeepwinter #montrosetop #cashmerettepatterns #burdastyleplus #linenpants #139Burda042011
Love how @lucky_sew_and_sew explains #DestashBaltimore below. Destashing lets me get down to fabrics I love, add fabrics from others that work better for me and spend time with other creatives. ⁠ ⁠ Tickets available on my profile as "get tickets" or go directly to DestashBaltimore.EventBrite.com ⁠ ⁠ **Pictured: Fabrics Renee bought, some from her first fabric shopping trip to NY, that just aren't 'her' anymore. All coming on March 14.⁠ ⁠ ----⁠ Reposted from @lucky_sew_and_sew⁠ ⁠ One of the many things I enjoyed about this event two years ago was seeing people find plenty of free fabric and patterns which was so liberating to use without the self-limiting talk about costs and beginner skills. ⁠ ⁠ So if you’re like me, buy a ticket so that you can bring all the excess supplies weighing you down physically and emotionally. And if you are a new sewing aficionado then buy a ticket and spread the word that this is the best way to build your “resource center” and boost your creativity. ⁠ #DestashBaltimore #baltimoresews #MDSews #marylandsews #charmcitysewcial
Destash Baltimore registration is open!⁠ Link above for tickets. ⁠ What is Destash Baltimore? It's a great big community drive fabric and fiber swap. ⁠ Come to lighten your fabric load or pad out your closet. Stay for the maker fellowship! ⁠ How does it work? Bring in and donate your unloved fabric, patterns, books and yarn. Then "shop" what others have brought in. ⁠ We've partnered with other organizations to take what's leftover. That simple! #destashbaltimore ⁠