I made up my first pants sloper over the weekend and took it in to my instructor yesterday. I don’t have photos of it on me, because I left my camera at home yesterday.

Here were the three problems:

1. The grain lines were bending inward above the thigh from about the hip to the waist

2. Small whiskers at the crotch

3. Swayback and short/ dipping at center back 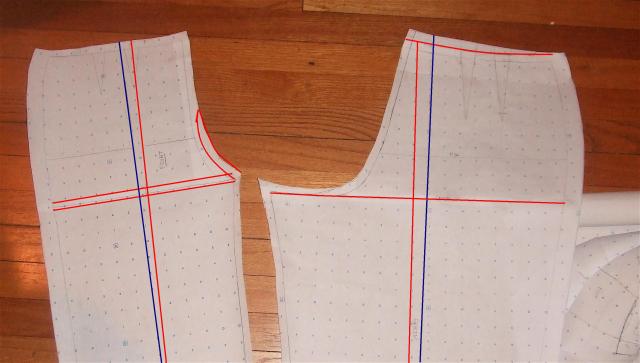 1. Redraw the grainline. She marked the straight/ creaseline/ grain on me while I was wearing them. Now, I’m not sure this is correct! In the front it was off about half an inch, the back a full inch (2.5 cm). I talked to Marji after class and we’re both curious about how this is going to work out. It just seems too easy! Generally, the pants fit well. But, it seems to me that the grainline never changes and  I should be altering the pants to get the line to fall correctly. But. I’m willing to see!

2. Added 1/2 inch to the bottom of the crotch line while shortening the crotch 1/2 inch.

3. Took in 1/2 inch for swayback and raised the back by 3/4 inch — tapering to nothing at the sides. I also copied the same 1/2 inch crotch shortening exercise from the front.

Hopefully I can make these up tonight for tomorrow’s class. The pattern is due!

BTW, does anyone know how to *draw* on photos with a Mac?