I never make dresses that look like they might be clingy or straight. I am a pear shape with my widest part being my thighs, not my hips. Yet, I was intrigued by BWOF 2-2009-119.  I knew Trena made this one up and I checked with her. She said the line drawing was deceiving and it was flowier than it appeared. 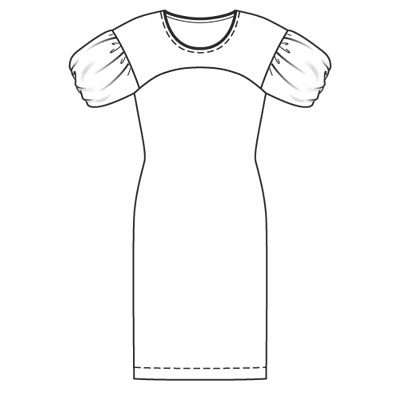 It seems what she meant is that my thighs are bigger than hers. ‘Cuz,  I cut it out while grading up three sizes through the thigh and all I can say is ‘giddyup’.

Nothing like fabric bulging at your thighs and unceremoniously dipping back in. Since I can’t wear this to work, I went ahead and hemmed it above the knee.  Now, before you say ‘It’s not that bad’. These are the most flattering photos I could take. I’m honest, but Vanity is still my middle name 🙂 This still may get cut into a top. Overall it’s a nice pattern. Although, the sleeve construction seems to be more fussy than it should be. I called Trena about three times to understand them. What does Burda have against the word ‘understitch‘ ??

Alright. Instead of making a knit bias strip, I underlined the upper yoke. I think the dress would be better if I had underlined the entire thing in a knit. It would make this print sturdier and give a little more support.

From the back. I made a swayback adjustment. The line is pulling some. Probably from the squirrels fighting back there.

And here I have found my Costco brand spanx. Hence the big smile. I’ll see if I can wear this over the summer for going out. But, if I find I don’t wear it. It’ll be cut into a top. I’m going to give this pattern another go. I’ve already altered to add two more inches to the thigh area. Hopefully, that will do it.