Bias is a surly beyotch.

When I first made this Patrones 252-30 skirt two years ago, It was too big and too long. When I made it this time, I sliced at the hip, and took out four inches of length (which brought a lot of the bias fullness up to my hips). I did not take two inches out of the waist thinking that would make up for any weight gain and give me room to wiggle since the first skirt still fits. But, and this is a BIG but, I stabilised the waistline with twill tape this time. I did not the first time. So, the bias waist (the first time) grew — making it too big. This time, it did not grow,  making it the original size which is apparently too small by about four inches. Which means that in order for the skirt to fit this time, the waist line sat just under my breasts. 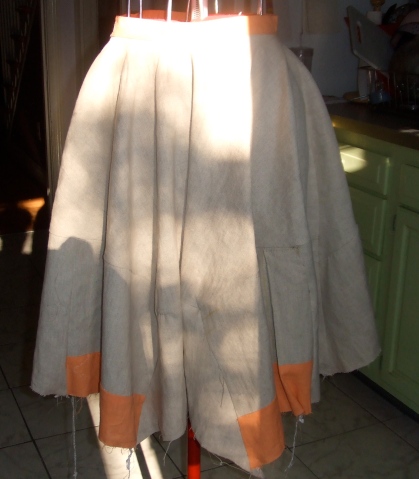 Call Carolyn on the way to see Inception (Great movie. Didn’t understand half of it.) and she suggested cutting down the waistband by no more than one inch. Brilliant. I do it.

I take in and take in — six inches give or take. Finally, it fits!  But, it’s so stinking full now at the hips. Like all the width of the skirt is now at my waist / hip. And, the bias was hanging funky because of all the alterations. I put the zipper in twice because of a rookie mistake.  One side seam is longer than the other. Whatever. I’m almost done. I put on the skirt. It fits! I can breathe! Then, the zipperhead pops off. SOB!

Uncle. I give up. I’m not going to re-insert a zipper for the third time in a yellow marked, wonky drape,  skirt that makes m look like a wedding cake topper.

I love this pattern, but I’m done. It’s time for  glass of wine and to pick another project.