Now that I’ve got some of the sewing related stuff out. Here’s a final post on how the rest of the trip went.

Before we started the bike and barge portion, we spent a day on a bike tour in Brussels. I’ve done bicycle tours in Minneapolis, Montreal and Shanghai. They really are a great way to cover a ton of ground and get an overview of the city.

The Royal Palace was open for about three weeks for tours for the year. But, we could not seem to get organized around things shutting down around 4 p.m. Thus, I missed my chance to tour the palace. A theme which continued on in the Netherlands.

The Liege waffle might be the best thing I’ve ever eaten.

I’ll also just tell you now. We had a lot of frites. I’m not that in to chocolate. I don’t think we even bought any on this trip. But, I ate waffles and fries like they were being discontinued. They say the Liege waffle has sugar in the middle. I decided it’s not sugar. It’s crack inside of them. They were that additive.

After a day in Brussels, we headed to Bruges. It’s SO BEAUTIFUL. All I really knew about Bruges was from the movie, In Bruges. Guess what? There’s a Bernina store there! If you think the prices are high for Berninas here, the feet there would cost me 30 percent more because of the exchange rate. Ouch. 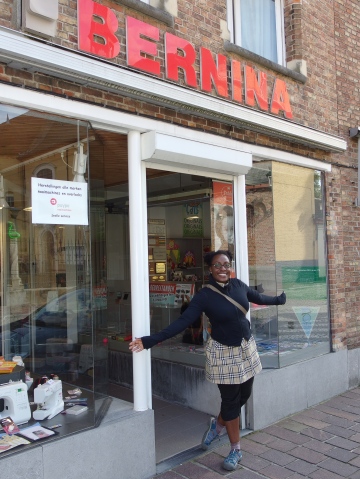 Right-o. The bike trip began in Bruges. Our barge would sail during the day while we biked and we’d get back on board in the evening. The crew was great and the food was awesome. 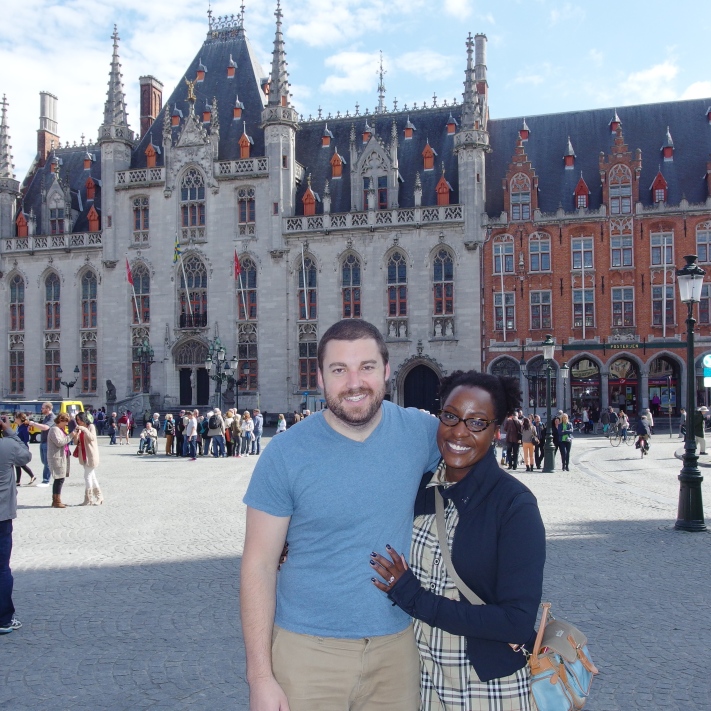 The biking was fun! I wasn’t at all prepared for it training wise, but you didn’t really need to be. That said, it was a lot harder for me now than three years ago. Jordan on the other hand thought it was easy peasy.

We  saw castles and windmills and ate lots of cheese.

We also visited a working dairy farm and bought more cheese than a cardiologist would approve of.

I gasped in this room. We brought back three Gouda cheeses. We have 1.5 left… 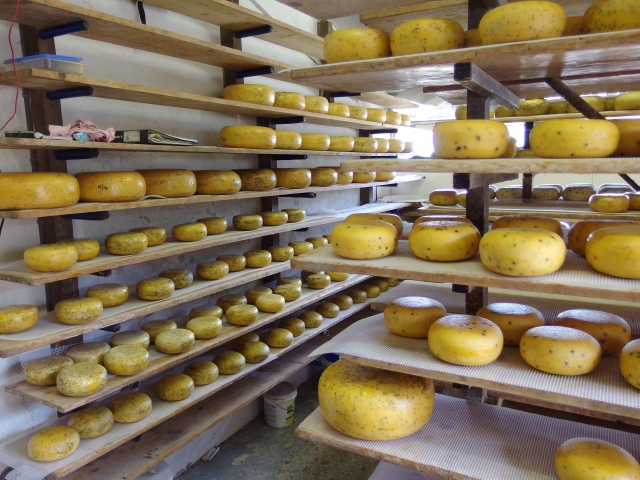 When we got on board our guide immediately knew our names. I asked how he knew it was us. And he said, ‘Easy. You’re the youngest people on the tour.’ Isn’t that awesome? The next person in age to me was 20 years older and they rode hard. Do you see why I can’t moan about being out of shape?? This guy below is from Australia. He’s 75. Jordan is the same age as his oldest grandson. And, he kicked our butts going up hills. He’s got the legs of a 35 year old. He’s in a bike club in Australia and has two hip replacements.. He was awesome. I tried to hook him up with Jordan’s grandmother but I suspect the distance between Melbourne and Maryland is too far.

Along the tour we stopped in Utrecht and Antwerp before getting in to Amsterdam. Once the bike and barge portion ended in Amsterdam, we rented a flat for a few days in the Jordaan neighborhood. I got a total kick out of the name. Jordan didn’t think it was as funny as I did. I never did find him a tee shirt that said Jordaan… 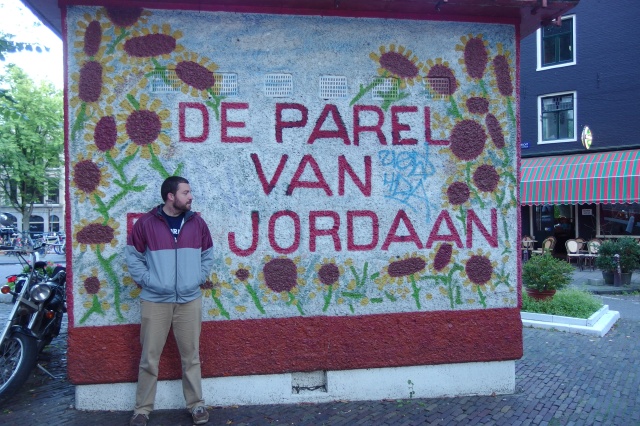 Our first day in Amsterdam we took a really fun food tour of Jordaan, the neighborhood we were staying in. We sampled all kinds of Dutch specialties including herring, Surinamese food, Dutch food (bitterballen), licorice, and Dutch apple pie. 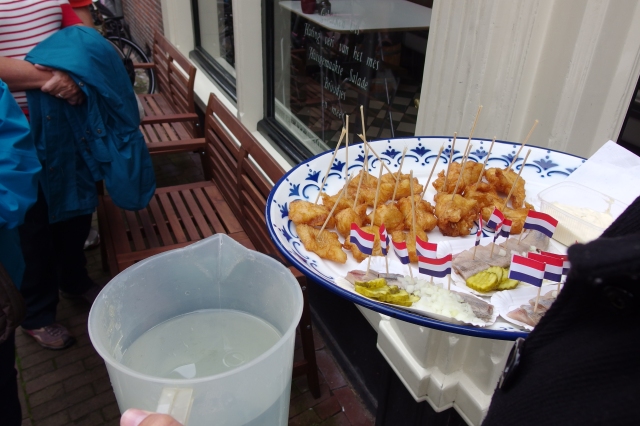 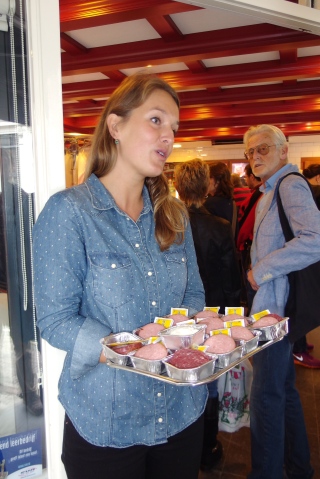 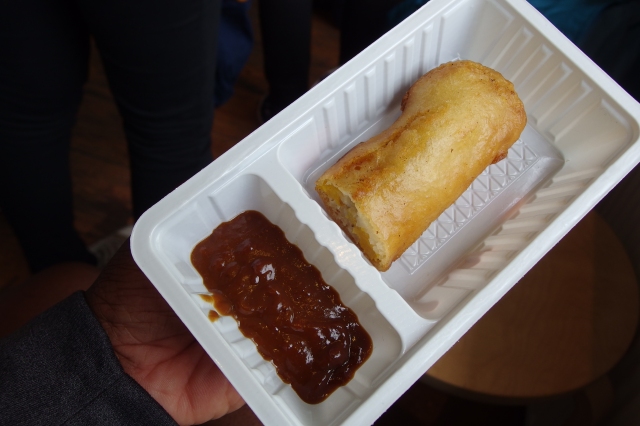 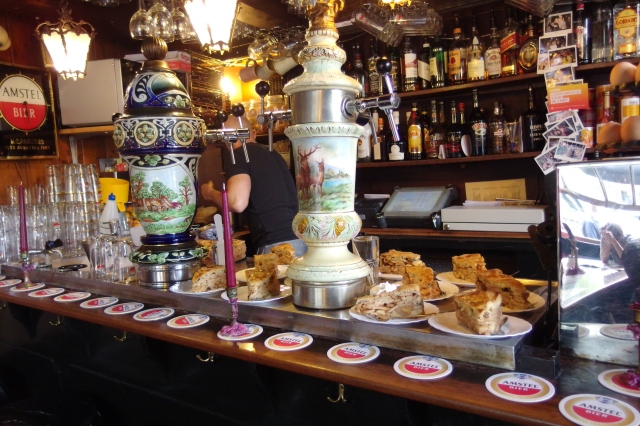 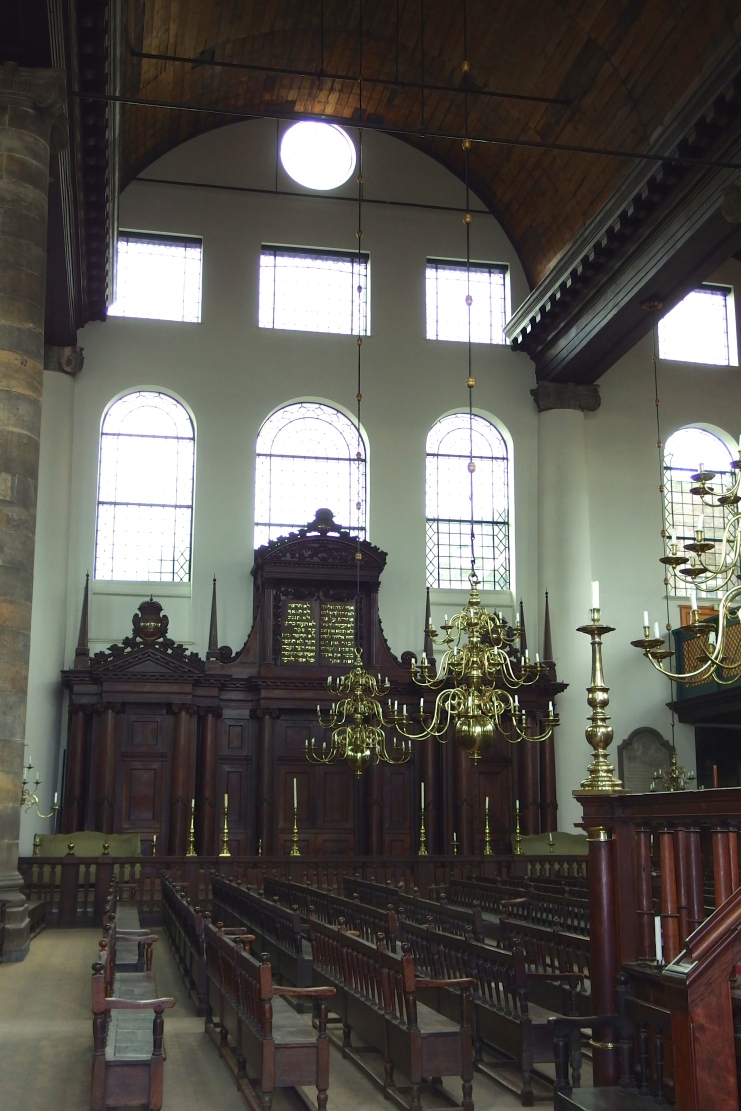 Sunday night we saw an English language improv show with all American actors at Boom Chicago. Isn’t that amazing? American comedy in Amsterdam. And, the place was full! 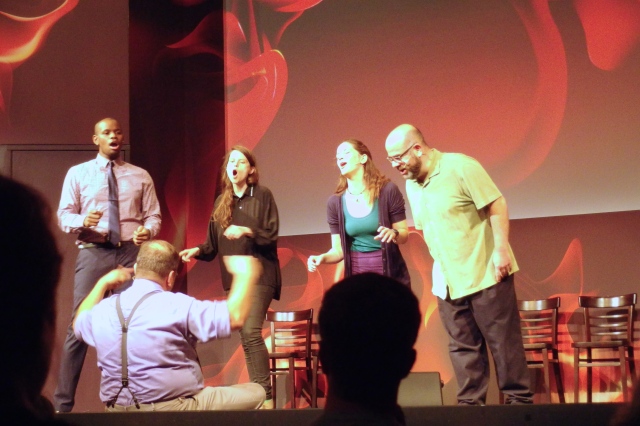 When you walk around Amsterdam, you can see in almost everyone’s window.

Imagine how tickled I was when I saw a dress form on a canal house boat and a woman working away on her sewing machine! 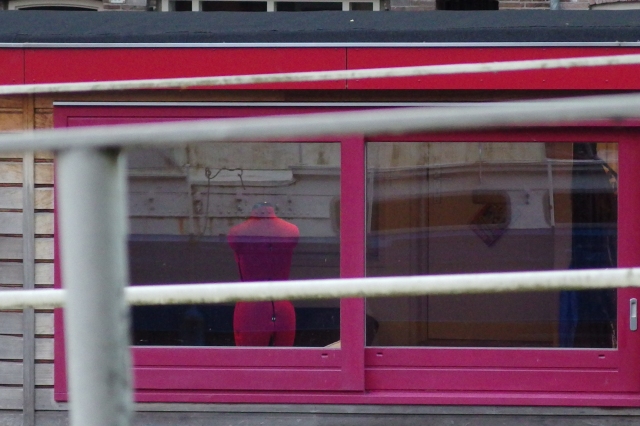 And of course, I still can’t get over ALL THE BICYCLES.

It was a tremendous vacation. We chose our honeymoon in the middle of what I can only describe as the most surreal time of my life. Traveling, especially in Europe, reminds me of my mom in all the best ways. She always took us on trips and suggested places to go. Traveling was really her passion. This trip felt like closing the chapter on an emotionally complicated period and opening a door to the next phase.  The last year I’ve literally felt like the walking wounded. I didn’t realize  just how much was weighing on me.  I knew I was sad. I didn’t know I was crippled. I am honestly starting to feel like me again.

Learned last year you take quilt photos in the snow, so here I am! This is the #RhythmQuilt from @loandbeholdstitchery and quilted by @quilts_madewithlove.⁠
Thanks to a gift of leftover fabric from @callmedwj , I was able to make this jinbei style romper for baby girl. It also seems like the time to tell you that preorders for this leopard-like "Black Magic" Afro print from @queenora_renee_fabrics are open and I'll obviously be adding more to my stash.⁠
Still the One.
Per my blog, I started my Single Girl Quilt by @dsquilts waaaay back in 2009 when I was solidly a single girl. It was my second "pattern" quilt and only took me 12 years to finish. Why 12 years? Well, legit. I cut out ten thousand pieces for the largest quilt I've made to date. And I ran out of fabric. Then motivation. Then I didn't love the colors anymore. And while I will now admit that I do quilt, I am still first and foremost a clothing sewer, and that will always take precedence.⁠
Made our Rubaby stuffed frogs from my mother's old BDUs. I'd always wanted to make a memory bear for myself, but when Ruby came along, my dad was willing to give me her old uniform. I chose a frog because they are green and I've always been fond of "Rainbow Connection".
Most of you don’t know that we have been trying to become adoptive parents. As with many other things, COVID basically shut the process down. But as the world started opening back up recently, we were hopeful there might be some progress in the next six months.⁠