Over Thanksgiving I pattern tested Melissa Fehr Trade’s Surf to Summit Top for men. Note, I didn’t make one for myself because I neither surf, nor summit. Jordan on the other hand snowboards, runs and bikes. One time we went running together and I *begged* him not to run with me. I get really self conscious about what a slow runner I am. And, I kind of hate being encouraged when I run. Just let me run in peace and self loathing. He wouldn’t do it and jogged along with me at my 12 minute mile pace. The next day, he had shin splints. Because, it was like he was jogging in place. ::sad trombone:: We haven’t gone running together since….

Anywho, I tested this pattern because it was free and something I would have bought anyway. I’m probably a terrible tester, because I sewed this sucker up in less than two hours on a Friday night. And, I glanced through the directions, but it’s really simple construction. I will say her diagrams are really good and I think Big 4 patterns could take a lesson from her on how to illustrate instructions. Her pattern description below:

Both the men’s and ladies’ versions feature princess seams, side panels (so no side seams!), your choice of long or short raglan sleeves, optional sleeve mitts for keeping your hands warm without fiddling for gloves, a tall integral collar to keep your neck covered, and your choice of two hem lengths. An optional half zip and back cycling-style pocket are also included.

I made the pullover in long sleeves with sleeve mitts. I would have done the half zip, but didn’t have a zipper on hand and wasn’t trying to go out over Thanksgiving to look for one.

Guys, I get the love of a PDF pattern — instant gratification and no shipping. But, I’ll only sew them if they are copy shop. Period. I know there are faster ways of taping, but I won’t do it. Some people won’t upgrade to smartphones and get on Facebook. I won’t tape PDFs. So, I was really happy I could get this one copy shop printed.

For Jordan, I first sewed a straight Large. His chest measured 42.5. Jordan’s clothing issues are short torso, broad chest, large biceps and somewhat narrow waist — but with a little extra weight around his middle.

After taking photos so she could see how the straight Large fit (above and unhemed), I took three inches of width from the waist. Jordan wants it even tighter next time so it’s a more a true compression shirt. When I sew it again, I’ll also add one or two inches in length. At first he said it was fine. Then, he went for a run and admitted his stomach got cold.

I really like these run mitts. When sewing them, I had zero idea what they were supposed to look like. And, feared I’d sewn them wrong. But, they are correct and Jordan said they worked brilliantly. But, he felt some stares when we was running, but said they worked so well his hands were sweating by the time he got home. Below on the left is the run mitt and on the right what it looks like when not engaged.

Finally, I made this up in some of my hoarded Under Armour Cold Gear. I have two more pieces of it left in red and sage green. I’m saving the red for myself and donating the sage green to his exercising cause.

This went together really quickly. All serger construction with my coverstitch for the hems.

I think I need to make some fit tweaks. I’d like to try an XL on top and through the arms and taper to a medium in the waist. I’ll also add some length at the bottom. And, this summer I can sew him some bike versions from the Nike fabric I bought in Minnesota this summer. Plus, with the seaming details, there’s plenty of opportunity for me to use some reflective tape to make him a bit more visible in the wild.

I’ve sewn some more holiday gifts for Jordan that I hope to blog after Hanukkah this week. In the meantime, Happy Hanukkah to those who celebrate. And for those of us waiting for Christmas, it’s less than two weeks away!!

Allow me to leave you with my new Christmas tree. Because, I can. 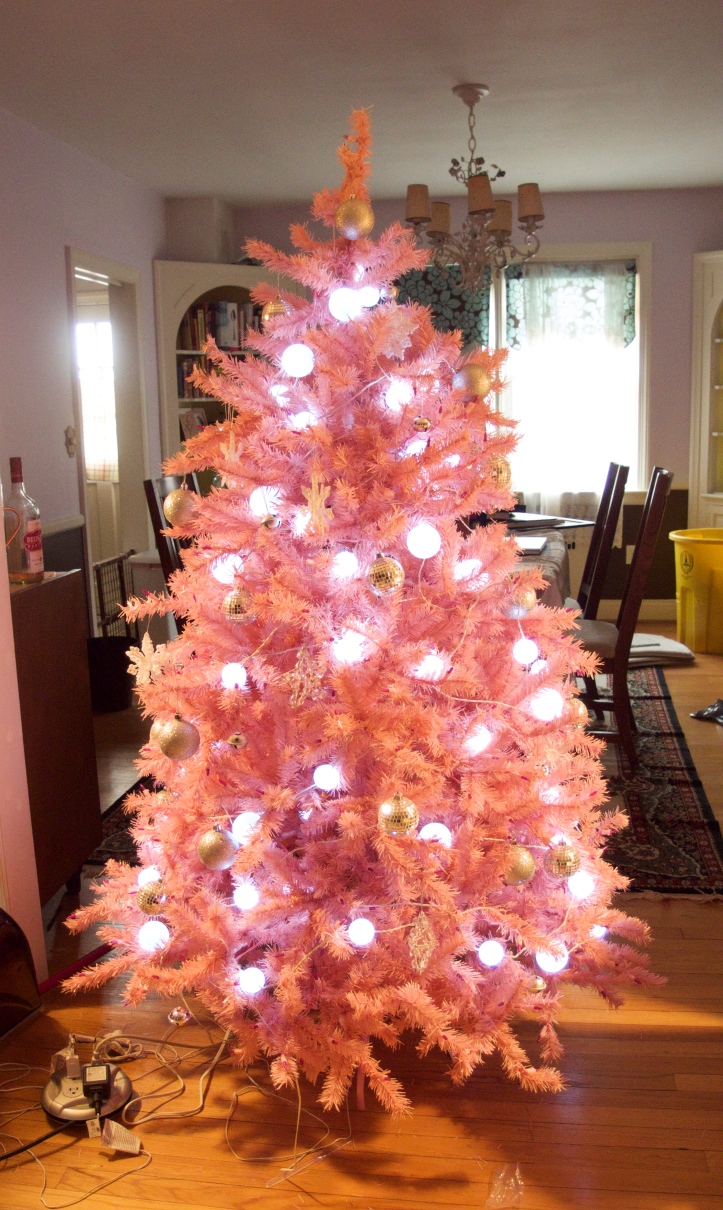 I've never gotten a finished garment photo of this @lekalapatterns 4711 tunic since making it in summer 2021. It's a great recreation of the Rachel Comey Dune top. This one is in linen and my first version in red silk charmeuse. I have worn this shirt at least once a week the last two summers.
I sewed a little romper for Ruby G's adoption finalization last month. You'll note she's wearing it with a long sleeve undershirt, because husband deadpanned, "it's too skimpy for her first court appearance." He's obviously planning for a third gen Attorney Rosenfeld 😂.
I was startled to see my first sewing machine on my dorm room desk when I found this photo ten years ago. It's a Brother mechanical and my mom bought it for me on a Wal Mart Black Friday special.
#Locaversary Post: I started loc'ing my hair in early 2020 and two years later, my Sisterlocks have "matured". Swipe for the first week (my god, so glad I got to ride that first year out at home). The third photo is from my one-year update.
Learned last year you take quilt photos in the snow, so here I am! This is the #RhythmQuilt from @loandbeholdstitchery and quilted by @quilts_madewithlove.⁠
Thanks to a gift of leftover fabric from @callmedwj , I was able to make this jinbei style romper for baby girl. It also seems like the time to tell you that preorders for this leopard-like "Black Magic" Afro print from @queenora_renee_fabrics are open and I'll obviously be adding more to my stash.⁠