Over the summer a neighbor posted on the community listserv that she was destashing fabric as she prepared for a move. Never one to turn down fabric, I went over for a wee looksie. Turns out she’d been a one-time reader of my blog (pre-graduate school) and collected vintage sewing machines.

And, then she showed me this:

Destashing neighbor has a white Singer 221 Featherweight 😍 Crossing fingers she'll consider selling it TO ME. This has been my dream machine (in white) for 20 years. #vintagesewingmachine #singer #singerfeatherweight #singer221

I immediately began trying to figure out if I could talk her into selling it to me. She wasn’t particularly interested in selling. And I was a motivated buyer. I knew I was leaving my job soon and finally merging bank accounts with my husband. So, now was the time to spend money any way I wanted. Plus, it was literally in my backyard. I kind of felt like it was meant to be mine.

Now, despite being lucky enough to buy  a black singer Featherweight in 2009, I’ve *always* wanted a white one. But, they were too far away and too expensive.

Short version: it took about two months of gentle prodding, prying and begging emails before she put a price on it. And, I took it. Happily. 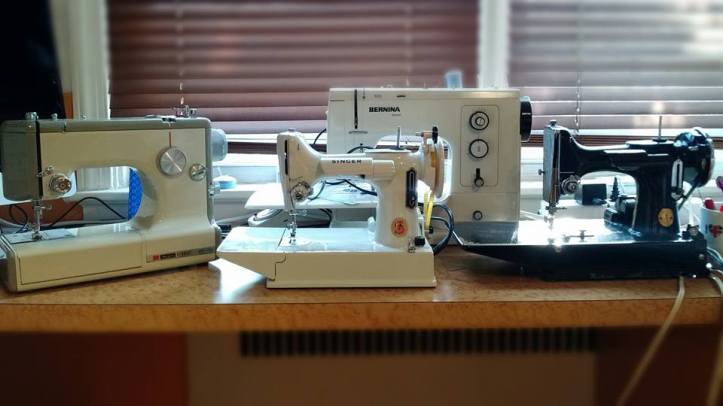 It’s a 3/4 sized  Kenmore 1040 (Kenny, acquired in 2007) , my main machine a Bernina 830 (acquired 2013). My new-to-me white Singer Featherweight and my black Singer Featherweight. I just realized that each of those machines has a sewing community connection! How cool is that?

Done with my Featherweight tote designed by @ingrid.vantuyl. Still need to make the folding bed mat. Used orange piping in homage to Dutch Mail fabric 😃 I'm not a 'crafter' and my work here is wonky. But, love this little tote. Protects the case and is super cute. Pattern available from @singerfeatherweight blog.

The first project I decided to make with my new machine was a  random carrying tote and sewing pad. So, very crafty of me, eh? I’m not prone to craft projects. But, I was housesitting the weekend I bought it and thought would be a fun thing to do that didn’t require my full sewing room. The pattern is available from The Singer Featherweight Shop.

To be funny, I decided to line it with orange fabric. Because, Netherlands = House of Orange. Get it? I often amuse myself with totally nerdy stuff.

There’s one piece I didn’t finish, the folding bed cover for storage. I may or may not get around to it. For now, I have the unfinished piece just sitting there, heh.

I am officially the cat lady of sewing machines.