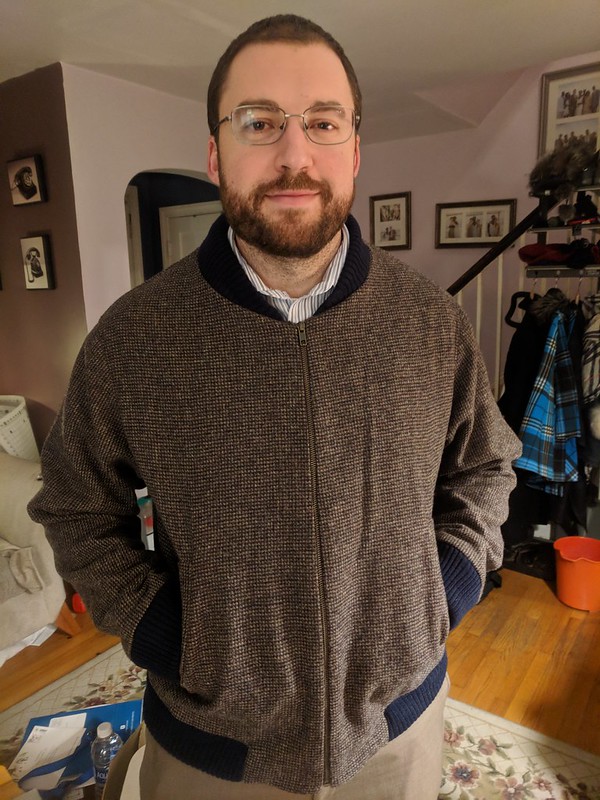 **This post is a repost of my original entry. Due to some technical difficulties, I lost a year’s worth of blog posts. I will be adding photos in due time. 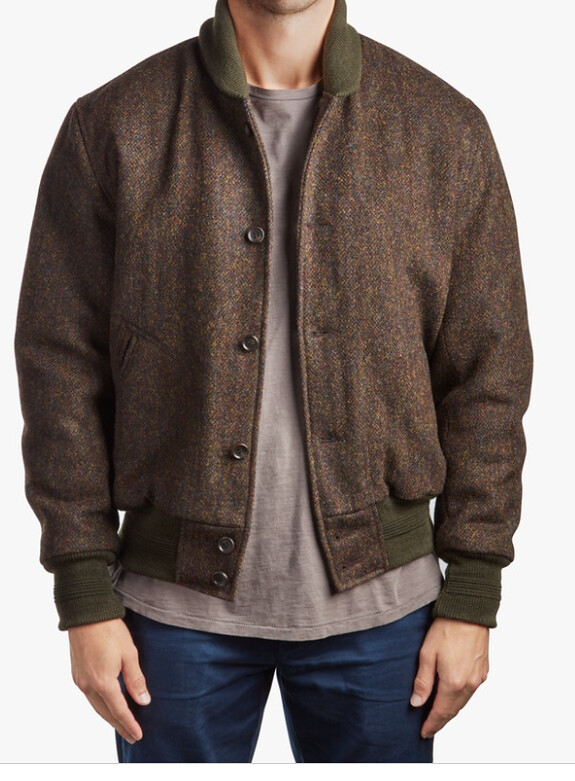 Jordan showed me the tweed Shinola Varsity jacket below a month ago and said how much he liked it. It was $500 — which I actually don’t think is too much to pay for US made product (I mean, it’s what I would charge AT LEAST). But, about $400 more than I would pay if I made it for him. 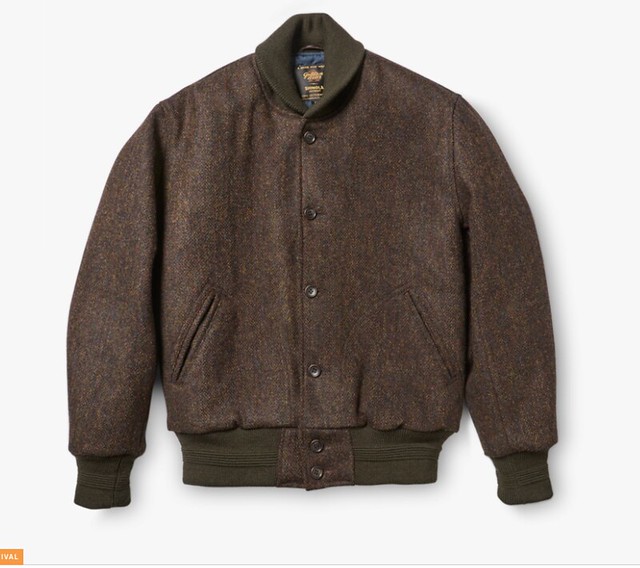 He picked out his own fabric from Fabricmart and I settled on the September 2013 #134 Burdastyle varsity jacket.

At first I was like, that’s not a varsity jacket!  Where are the leather sleeves? It has a zipper not snaps! But, once I sewed the muslin I saw why they said varsity vs aviator or bomber. The sleeves are dropped like a varsity jacket and it’s much longer in the torso (and my boy has a short torso). 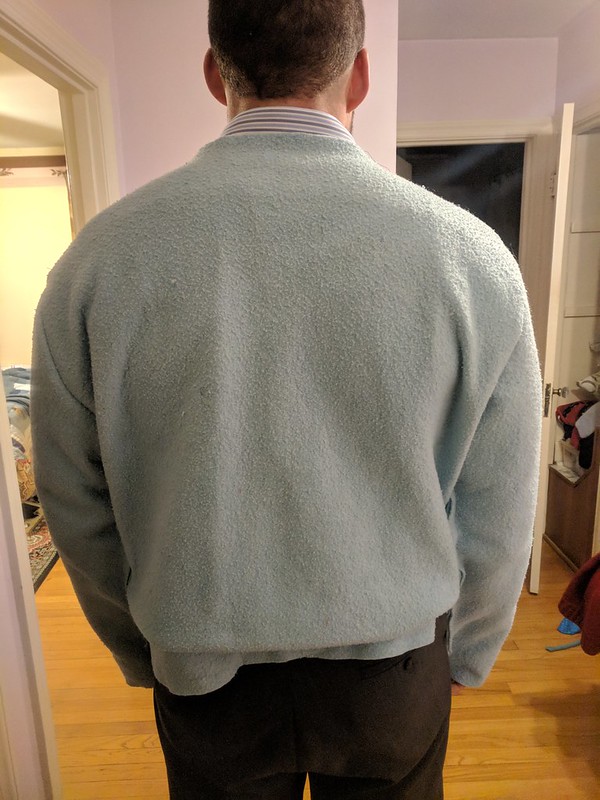 I decided to make a muslin because I’ve only made him one semi-fitted outerwear garments (this Hot Patterns jacket from three years ago) and am I glad I did. I HATE HATE HATED the shoulders on this. Those folds at the armscye made me want to scream. 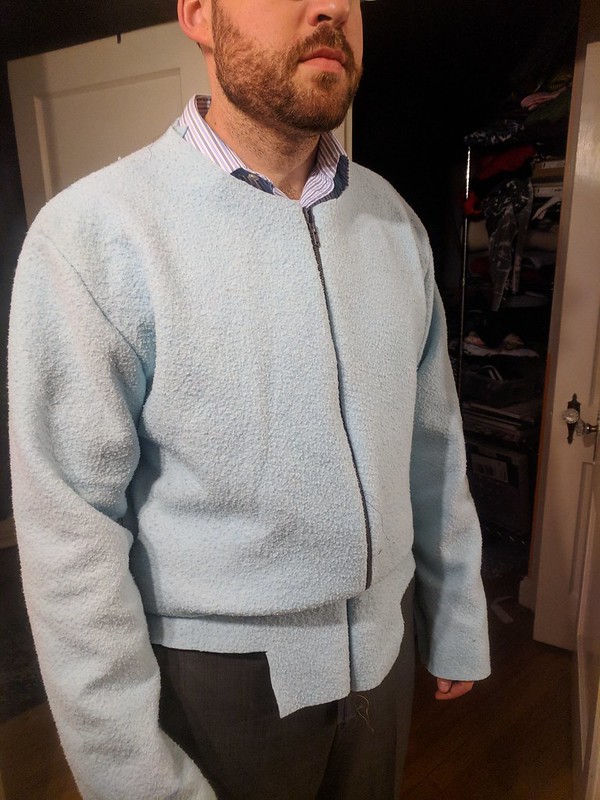 Blech. Look how long the shoulders are!  Looking at the original photo on the model I can see that they are long/ wide. But, this looked sloppy to me. And, I wanted a more fitted aviator style (in truth, maybe I should have gone with this Burdastyle from 12/2015 #125). 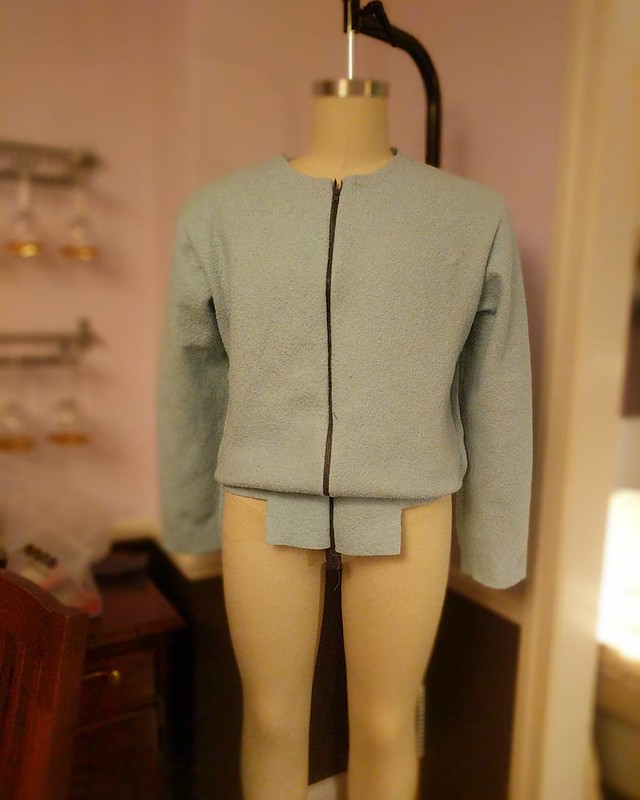 The first thing I did was narrow the shoulder sleeve by 1″ making it more an extended shoulder rather than dropped. The nice thing about using this thick old blanket for the muslin is I could really get a sense of how the fabric would work in wool. 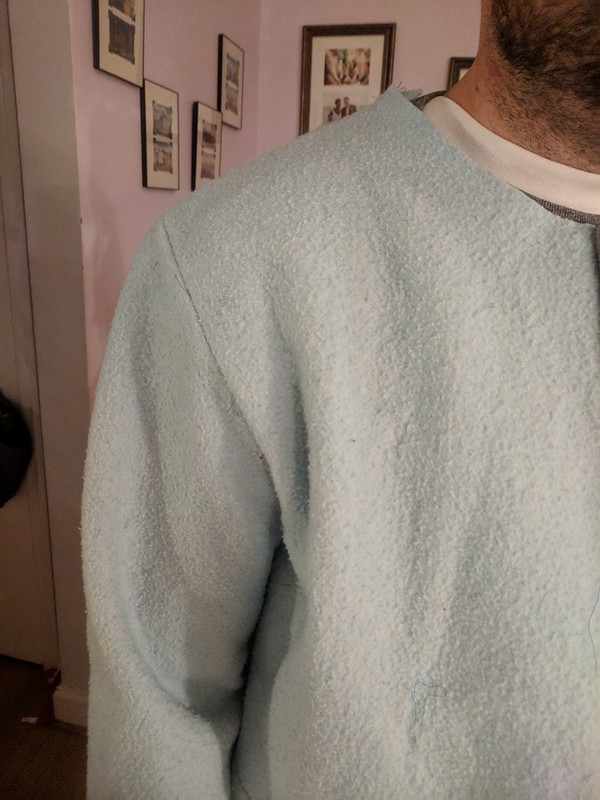 Than, taking advice from Instagram, I saw Jordan has sloped shoulders. I really think he has overdeveloped traps with short shoulders rather than technically sloped. But, semantics. 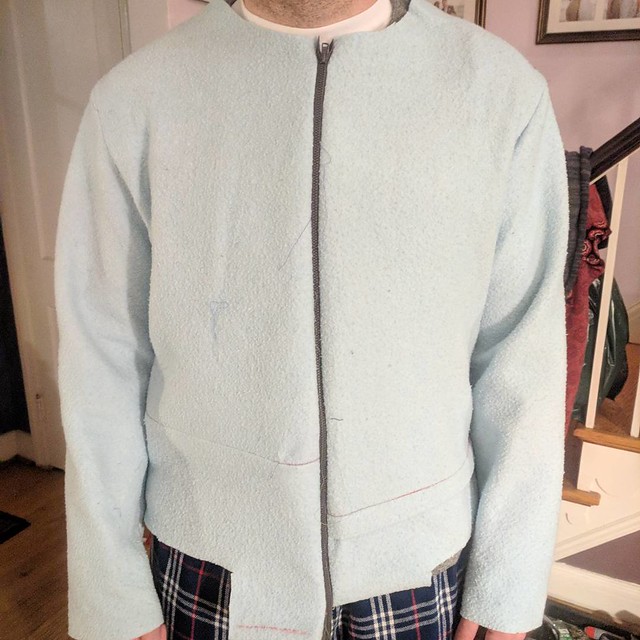 Jordan’s chest is 44″ which puts him in a Burdastyle men’s 56. His shoulders are 6.25″ long and his waist was between the 50/52 size (I went with 52).  I also shortened the jacket by two inches in the second muslin (I just made edits to the first muslin). 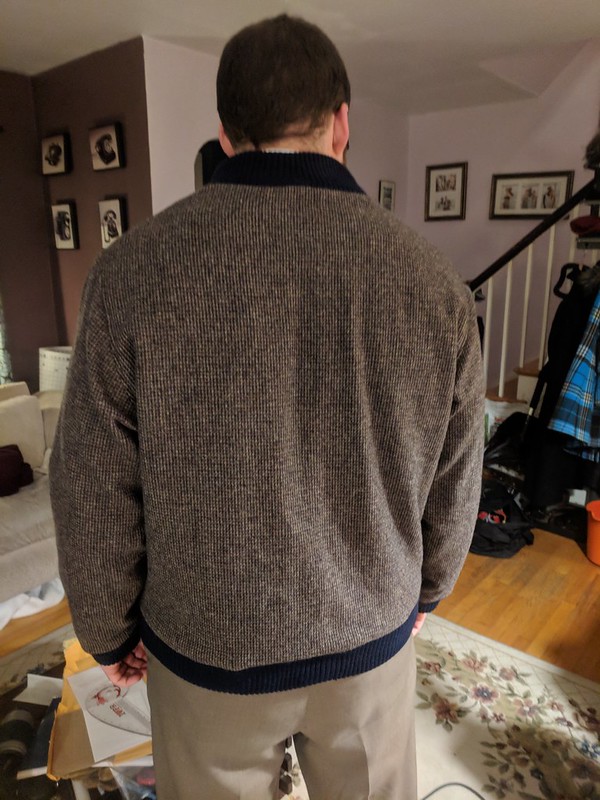 Here’s the back now with the shortened shoulder and a 1/2″ adjustment for sloped shoulders. I figured out his shoulder drop by using my level and comparing his drop to that of the pattern. I felt rather clever for having thought of that and it worked! Those horrible folds are mostly gone and the shoulder seam is sitting now where it should. Thanks smarter people than me on Instagram! 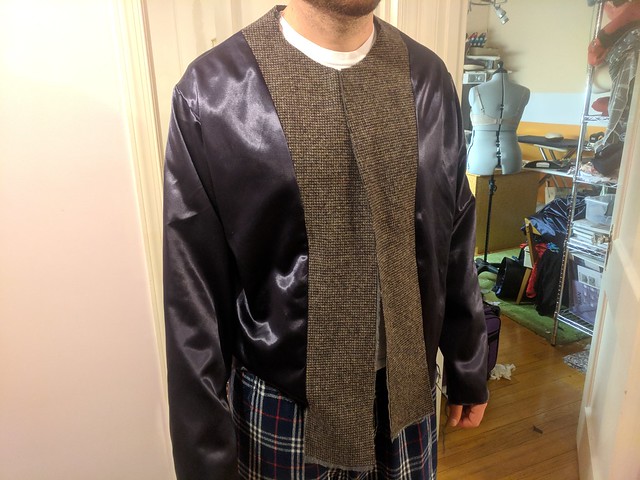 The jacket is lined in flannel back satin. And, I used stay tape at the shoulders. The original jacket has quilted satin for the lining. I kind of wish I had done this to increase the temperature range for wearing the jacket. But, then again, I’m okay with the flannel back satin and tweed combo.

The ribbing is from Neotrims Etsy shop based in the UK. I LOVED the selection there. This ribbing​ is mostly wool with lots of bounce. But, you could certainly find some at Pacific Trim or any one of the NY trim stores (I thought briefly about making the ribbing but was running out of time to have this ready for Hanukkah). I did end up taking two inches out of the collar pattern so it would snug up against his neck. And, I see that the collar isn’t 100%. But, it’s good enough.  Oh, I also had to shorten the sleeves by 3″. 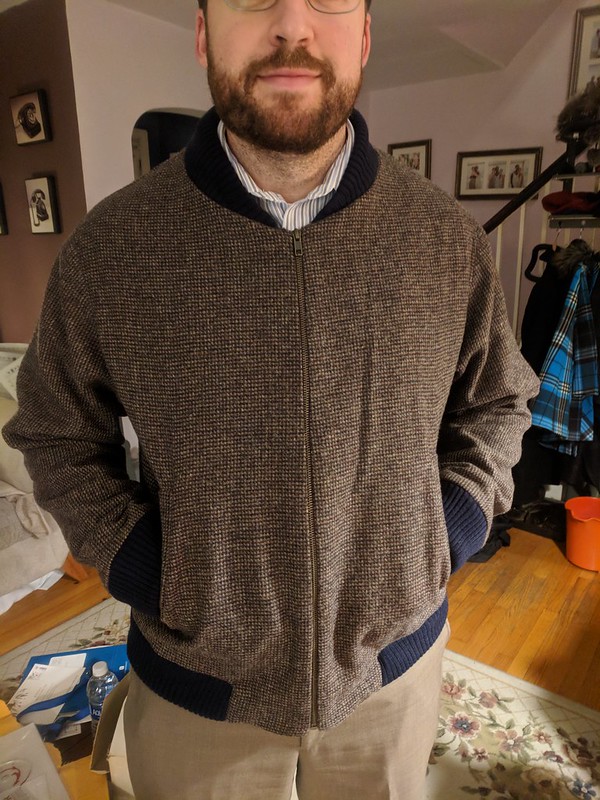 The welt pockets were sewn using a technique from Kenneth King’s Cool Couture. It took me an embarrassing amount of time to wrap my mind around the technique and THREE samples before I got the hang of it. But, once I did I saw how elegant a technique it was. He has a class on pockets that covers this technique on Craftsy if you’re interested.

The pocket bags themselves are a little small I think. Just big enough for a phone really. But, not quite large enough for jamming your hands into for warmth. 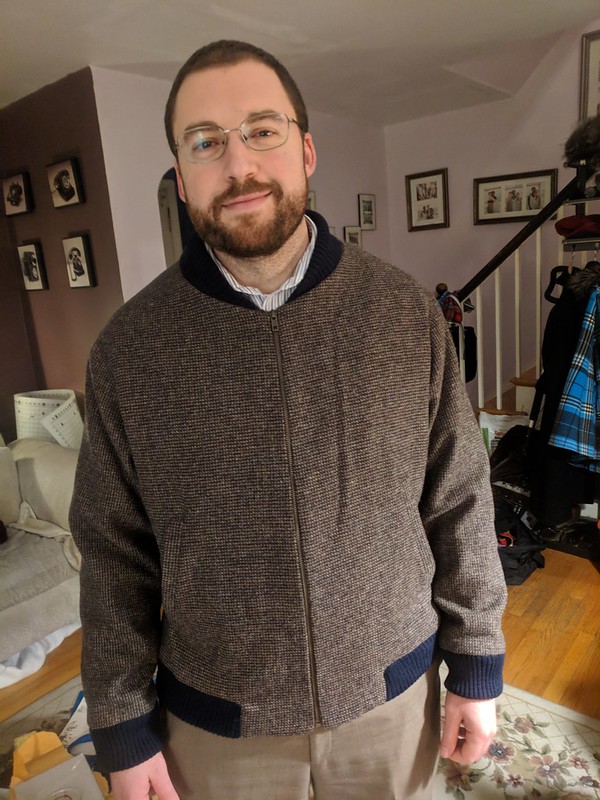 Isn’t he the cutest? Like for real. THE CUTEST.

He told me these are the best looking sleeves he’s had in a garment (they are always too long or too short). Plus, he usually has things taken in a bit at the waist. I don’t know that I would ever try and sew for him as a surprise either. It was much less stressful to try it on as I went — just like I would for myself. That’s all! He’s happy with his jacket. I felt like a magician! He saw something he wanted and I was actually able to make it!