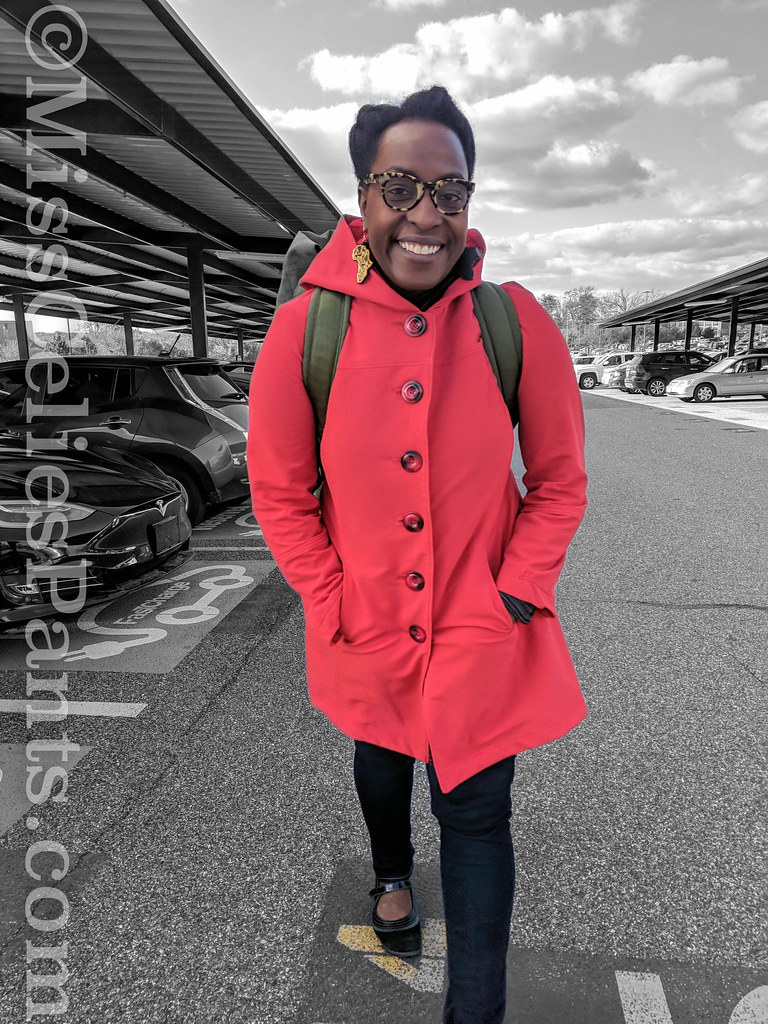 There have been a thousand and one reviews of this pattern gem.  It’s about to be a thousand and twoooo. You see, I finally got around to making the Jalie City Coat and I am 120% in love with it. 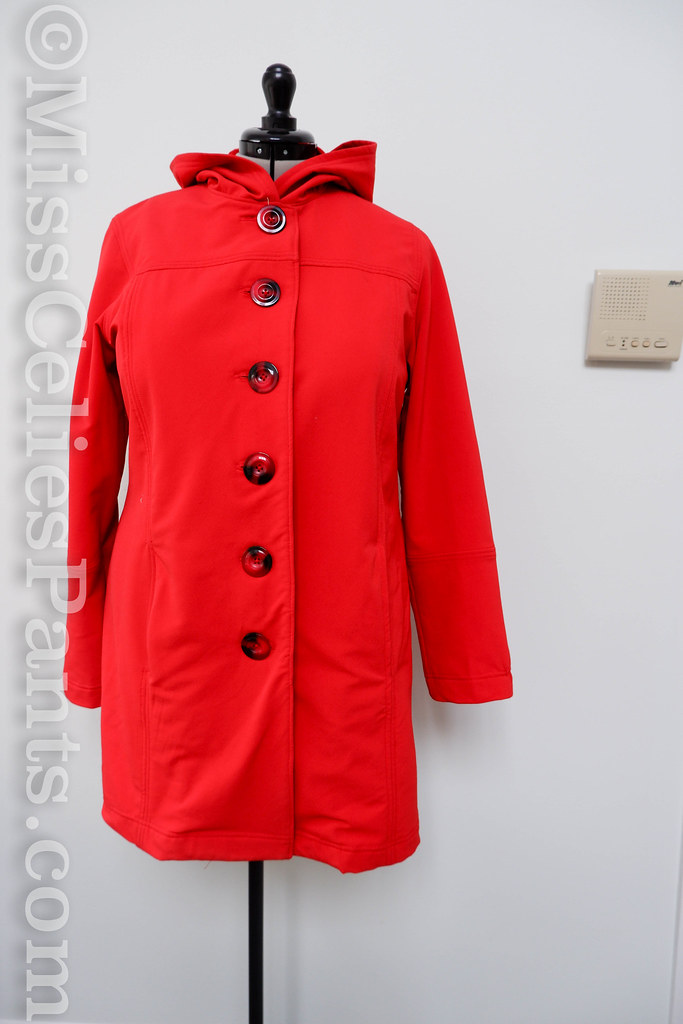 I really needed a jacket for travel and to casually throw on in the fall season. Something waterproof and with a hood ideally for walking the dog or running to the store. The Jalie City Coat does all those things AND had extremely flattering and easy to adjust princess seams. 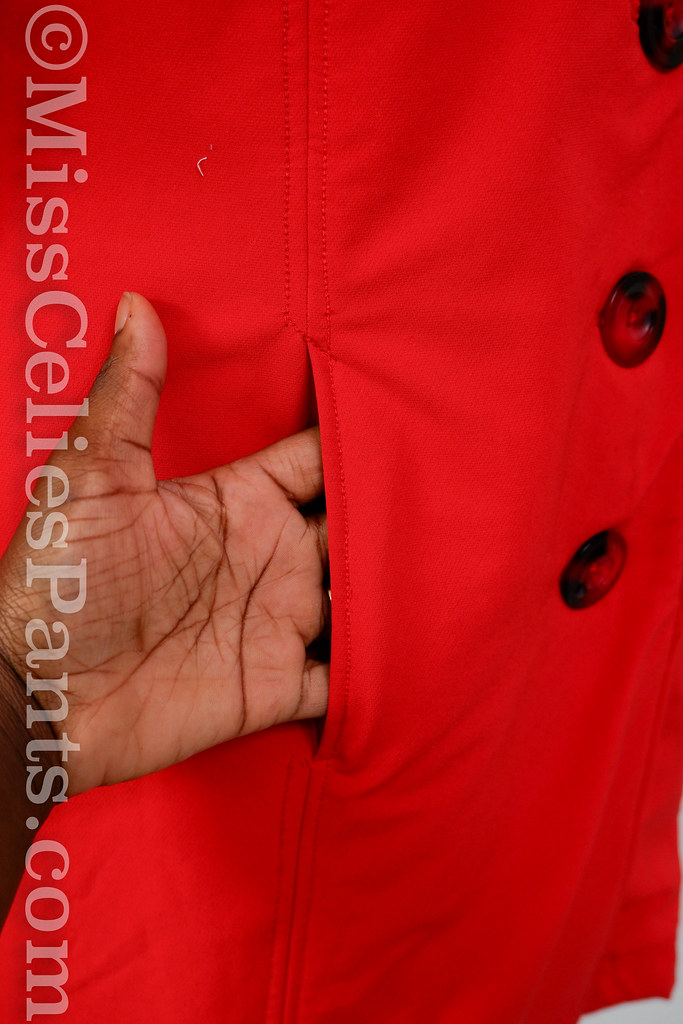 First, the pattern does call for a low stretch fabric. My soft-shell with merino wool backing from Fabricmart has stretch. But, I managed to cut it with the stretch going lengthwise vs horizontal. After a few panicked messages on the Jalie Facebook group, I was assured from others it would fit. And, it does! 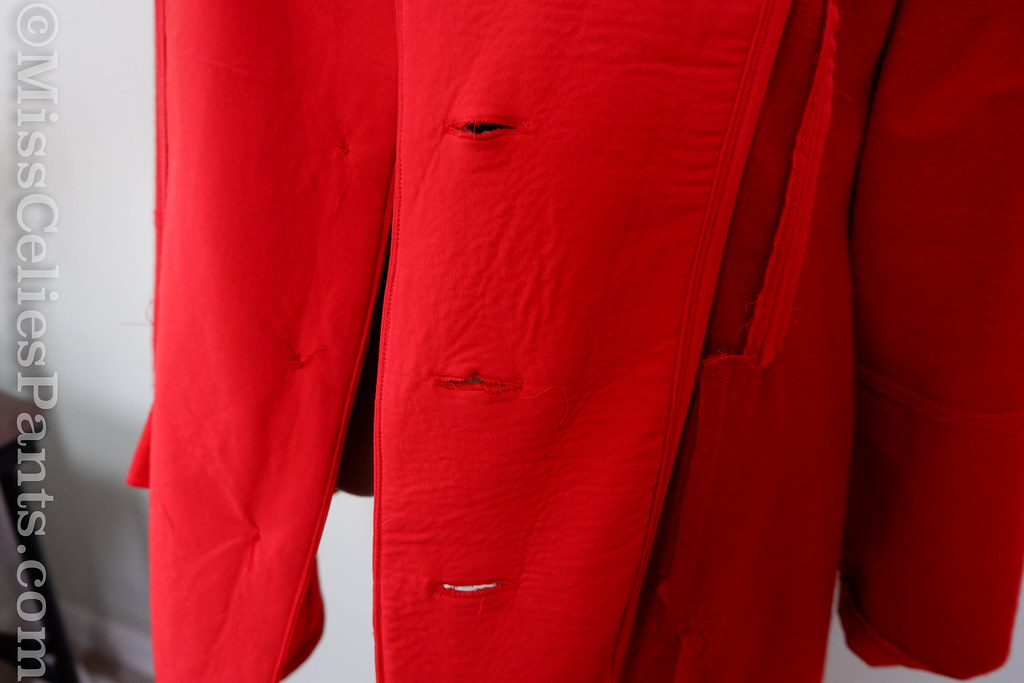 My other error made a longer lasting impact. My iron was WAY too hot when I applied interfacing to the front facing. It melted the facing, which caused it to shrink. I had to get ‘creative’ (read, made a mess) with the hem. Which caused some not so great pulling at the front and wonky hem. THIS DOES NOT ABATE MY LOVE OF THE JACKET. 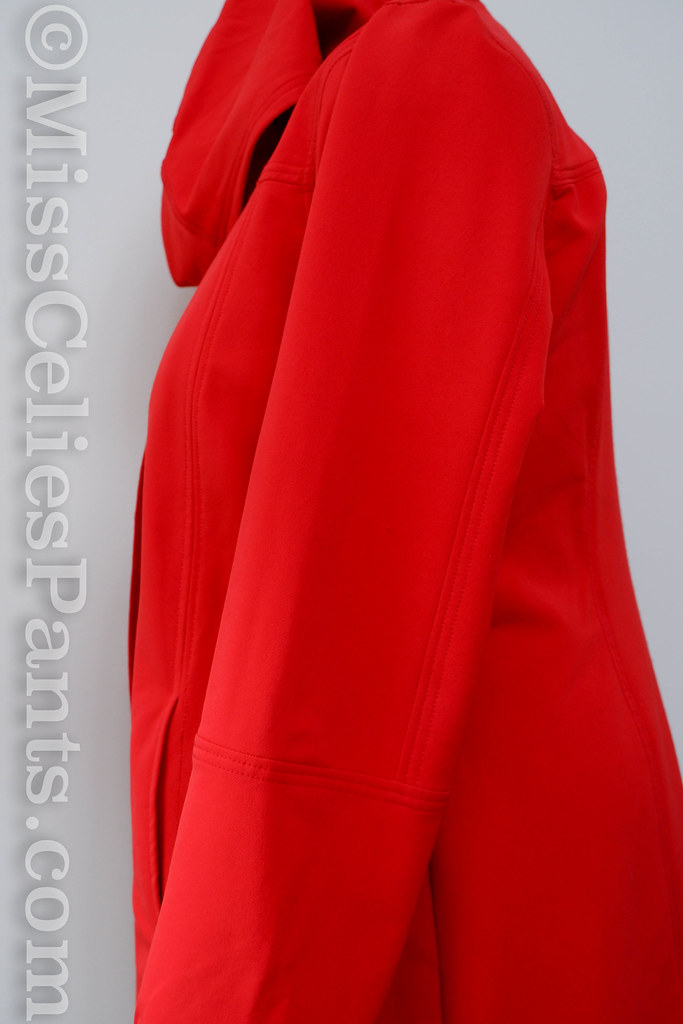 Now, on to the good parts! 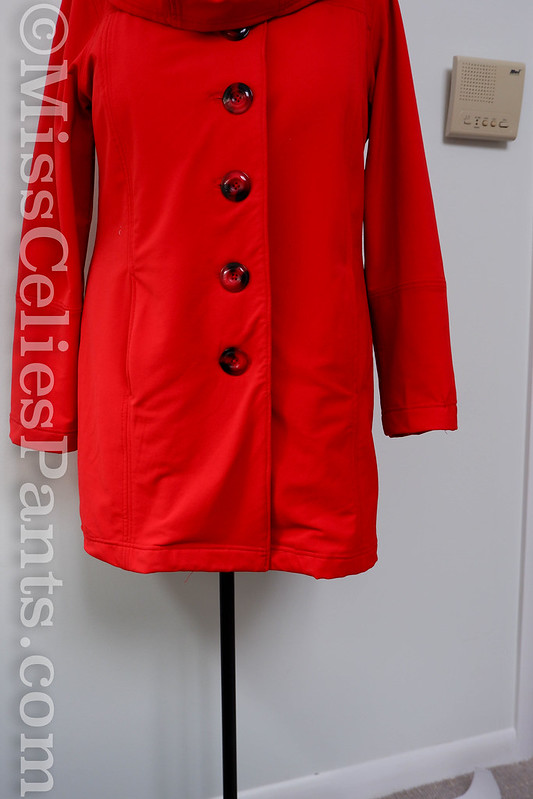 You’ll notice there’s some fabric drag around the pocket areas. I believe this is because I accidentally cut the fabric with the stretch going vertically instead of horizontally. So, it’s not as stable as it should be.

The jacket is drafted unlined. Which I welcomed because I wanted an easier project with less finishing. It also gave me a chance to use my new Brother CV3550 coverstitch machine. In fact, this project was basically my unboxing as it sat in storage while we moved for several months. 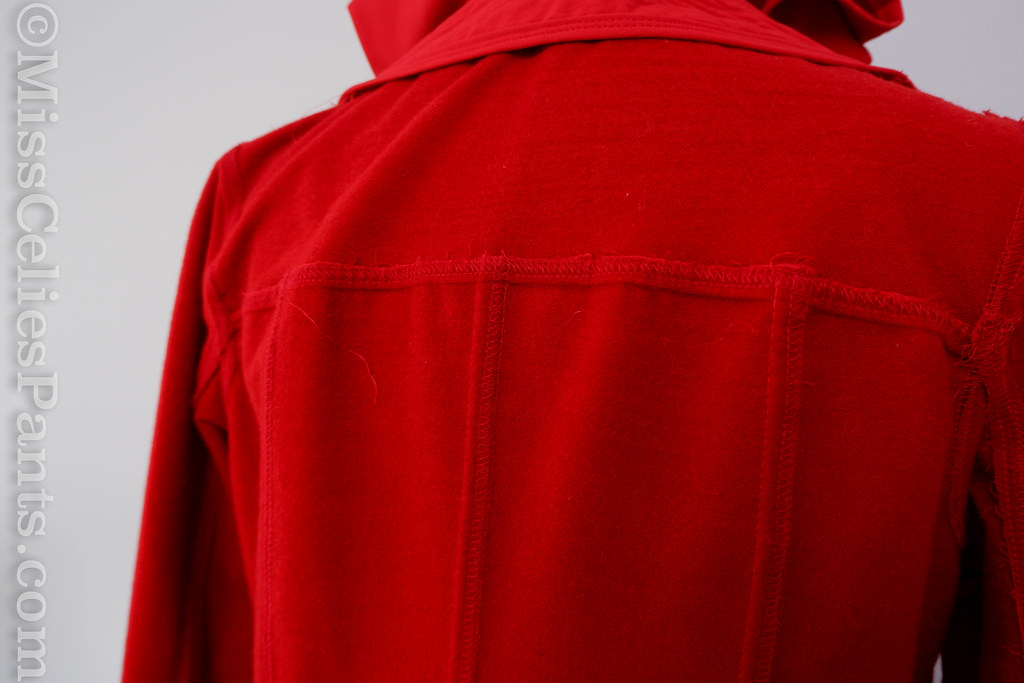 For this jacket, I finished most of the seams with the coverstitch. It provided the topstitching a seam finish in one pass. Using the written directions I wasn’t able to finish the front princess seams in a way that made me happiest. 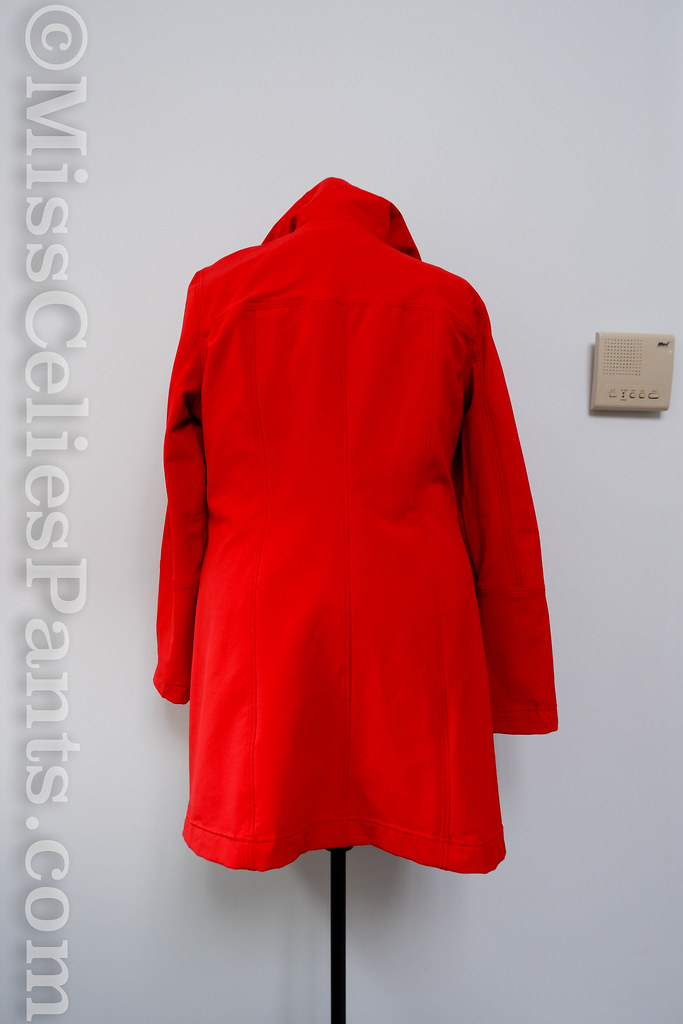 If I were to do it again I would:

When I make this again I will:

Interfacing is optional in the facings and I used it. I’m glad I did as I think it helps provide support for the buttonholes. 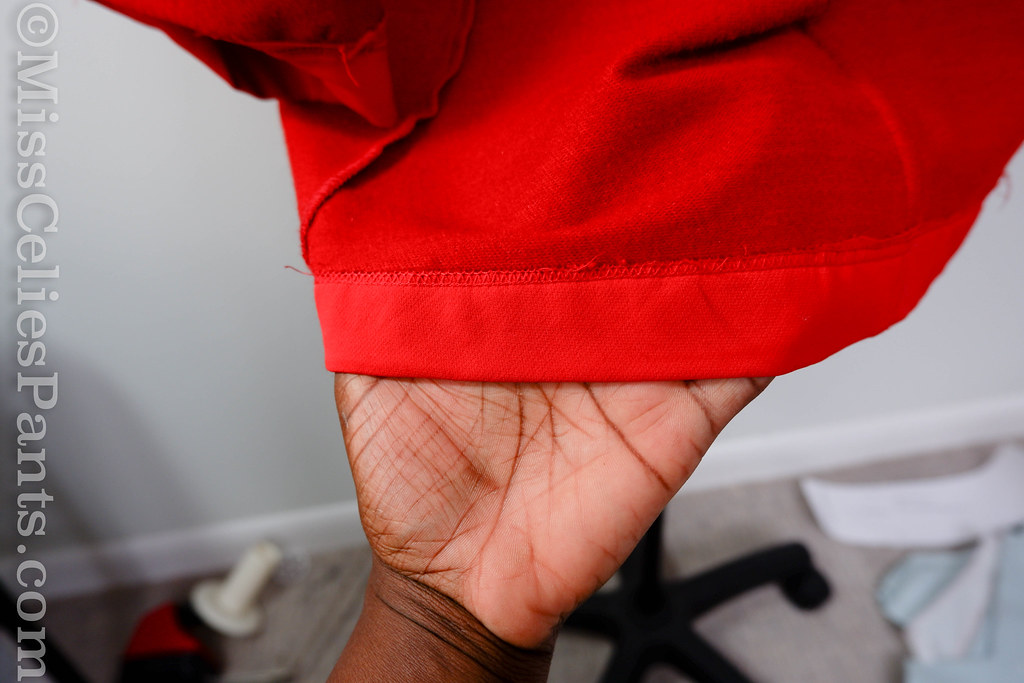 Finally, hemming was also done on the coverstitch.

This whole project took a little longer than I’m used to with sewing. For those who aren’t on Instagram, we moved about two months ago. We haven’t sold our old house yet (more stressful than I anticipated) and I have unpacked the bare minimum for my current sewing room. There’s a lot of work that needs to be done in my sewing room starting with hardwired lights. But, that’s a big financial project and we haven’t sold our other house yet, lol.

I also started this project a few days before I had an easy, outpatient surgery to remove endometrial tissue from my abdomen/navel area.  I’d been extremely uncomfortable for six months (trouble standing upright, not being able to sleep on my side or my stomach, waking up from cramps and weird pains I can’t even describe, no waistband touching my midsection) and finally went to my doctor for an endometriosis diagnosis and scheduled surgery. I was told the recovery would be brief, “back on your feet in hours”. And I was in fact home and in bed for a week. I’m also off of strenuous, core exercises and weightlfitng until the new year for fear of causing a hernia. The point I wanted to make on endometrios is listen to your body and go to a doctor when something doesn’t feel right. I shouldn’t have waited five months. I had no clue it was that or that there were some treatment options available to me. I feel much much better now and am working to keep it under control. Whew. I wrote a lot more there than planned. Next post: just sewing 😉. I made some red linen pants for our warm Thanksgiving mini break that I want to show you.

I've never gotten a finished garment photo of this @lekalapatterns 4711 tunic since making it in summer 2021. It's a great recreation of the Rachel Comey Dune top. This one is in linen and my first version in red silk charmeuse. I have worn this shirt at least once a week the last two summers.
I sewed a little romper for Ruby G's adoption finalization last month. You'll note she's wearing it with a long sleeve undershirt, because husband deadpanned, "it's too skimpy for her first court appearance." He's obviously planning for a third gen Attorney Rosenfeld 😂.
I was startled to see my first sewing machine on my dorm room desk when I found this photo ten years ago. It's a Brother mechanical and my mom bought it for me on a Wal Mart Black Friday special.
#Locaversary Post: I started loc'ing my hair in early 2020 and two years later, my Sisterlocks have "matured". Swipe for the first week (my god, so glad I got to ride that first year out at home). The third photo is from my one-year update.
Learned last year you take quilt photos in the snow, so here I am! This is the #RhythmQuilt from @loandbeholdstitchery and quilted by @quilts_madewithlove.⁠
Thanks to a gift of leftover fabric from @callmedwj , I was able to make this jinbei style romper for baby girl. It also seems like the time to tell you that preorders for this leopard-like "Black Magic" Afro print from @queenora_renee_fabrics are open and I'll obviously be adding more to my stash.⁠