There’s no money in this for me

A sad, but true thought came to me today. I will NEVER make money sewing for other people. Because I cannot meet a deadline. You see, my friend Jon asked me if I would make a dress for his wife for her birthday. In 2008. Maybe even summer of 2008. He even offered to pay me my asking price. And yet, I did not sew it. They were going to Belize in January. A good a time as any to make up Simplicity 3503 for her. Nothing. But, the weather broke and my daffodils bloomed.

I was feeling motivated.

Finally, this week I told myself to at least cut it out. I even did a single layer layout so I’d have enough fabric for a top for me. And tonight, I bailed on bookclub (never did get a copy of the Love Languages) and just sewed. Couple hours later I was done. This maxi dress is pretty much the same as I made it before. 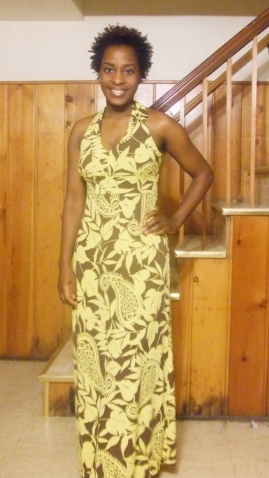 The finishing is a little cleaner in terms of I knew how it was going to go together.

The knit was from online and is a poly blend. The wife is Indian and we’re near the same complexion. So, I hope the yellow pops the same way. If I were making this for myself again, I would add a lining. It’s pretty thin and should be worn with a slip. Unless you are a hussy like me and don’t bother. I’m a little sad letting this go because I think it’s really cute. I think I still see another one for me in my future.

So, the short list: one more dress that I was asked to make. The Weekender bag I’ve been ignoring. And maybe a new dress for the high school reunion I can’t decide if I’m going to.